The project Blansko a okolí ve folklórních písních began with a meeting with Scottish artist and performer Jamese Wynesse at Školská 28 Gallery in Prague in November 2013, when he was visiting as a resident artist. His concept became a source of my new activities in the Czech Republic and I applied it on my home city Blansko. On the base of following experiences I evolved the project farther: apart from the audio recordings research, I also realised video documentation and its public presentation. James and I are still in touch and we are planning to introduce the project in Scotland.

The main idea is to recreate a relationship between folklore song and place which is the subject of its text. This site-specific project takes the songs from the sterile environment of concert halls and situates them in their places of origin. The acoustics of those places and natural environments enter sonically into the performed song, sometimes it impacts the song rhythmically and sometimes it blends along. An interpretation in such places changes the perception of the song and also gives a new perspective about the place. 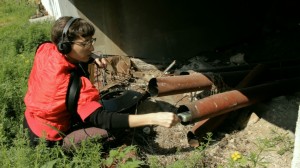 The first phase of the project consisted of collecting all kinds of songs, which have to do with the Blansko region. In autumn 2013, I asked singer Kateřina Reichová to participate on the project. She already had some experiences from her folklore-based theatre piece Byla cesta ušlapaná (The Well-Trodden Path).

From the collected songs, we chose only those that specifically describe certain places, such as Ó Blansko (Oh Blansko), Ta naše hospoda (Our Pub) and Na silnici ho Křtin v lesi (On the Road Nearby Křtiny in the Forest).

I made audio recordings of these songs in various  instrumentation combinations of accordion and voices and researched how certain environments influence the sound of the song and its atmosphere.

While we were looking for the places, we encountered lots of people from the surrounding areas, whether asking for directions or clarifying details from the stories the songs tell. This process was so interesting, and these interactions so rich, that I asked filmmaker Petra Kateřina Bučková to document our journeys visually too. 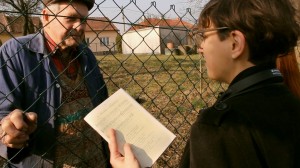 The filming resulted in a thirty-minute document about the project that will be presented on October 8th 2014 at Blansko Cinema at 8pm, during the festival Kolotoč.

Trailer of the film:

The next phase of the project consists of the presentation of the places and songs for the audience. On October 11th, we are organising trips for local people; traveling together by bus to the places documented in the film and singing together there. 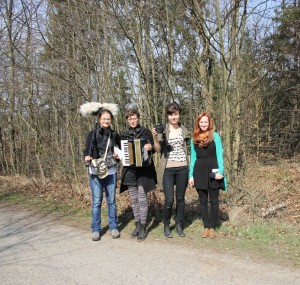 The first three sound excerpts are different performances of the song Oh Blansko. Each interpretation sounds differently to the others, listen to them and compare.

The text tells of Blansko castle and its gate, and so this is exactly where the performance took place.

The first version is the melody played on accordion, influenced by the stony echo of the castle yard:

The second version is performed by two voices without accompaniment. During the singing, each of the performers was on the other side of the yard. On the recording you can hear the voices drifting apart and together as the performers move around, especially when each performer sang in the most resonant spaces of the square, the corners.

During the third interpretation, we were “disturbed” by a worker mending a cobble sidewalk in front of the castle. His rhythmical accompaniment complemented our song nicely.

The narrative of the song is about a sad mother who had to send her three sons to fight in the Turkish war.

9. 8. 2015 – screening of the film during Festiválek bez bojů a válek at Panorama Cinema in Boskovice City (CZ). More information Facebook.

23. 4. 2015 – presentation and screening of the film during alotof festival at Školská 28 Gallery in Prague. More information zde.

8. 10. 2014 – presentation of the project at Blansko Cinema followed by the screening of the document: Blansko a okolí ve folklórních písních. The event is scheduled during the festival Kolotoč and starts at 8 pm.

15. 8. 2014 – an article about the project in the newspaper Zrcadlo (Mirror) of Blansko and Boskovice Surroundings.